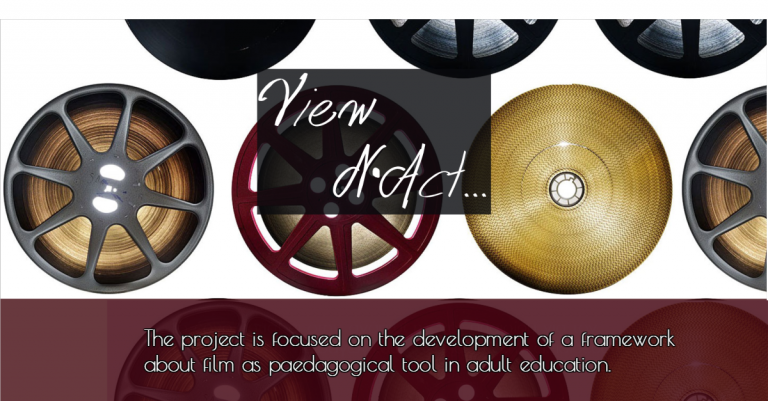 The project is focused on the development of a framework about film as paedagogical tool in adult education. Specifically, the partnership will investigate through concrete activities, the power of the moving image in articulating attitudes and shaping cultures towards social issues as migrants and migration, gender, equality and social justice. The basic question is under which preconditions and learning prerequisites, the film could contribute in foreseen learning outcomes, named critical reflection, active engagement in a democratic world, information gathering and exchanging views in dialogue, and on the other hand which are the training needs of the educators in order they become effective and confident in introducing film as paedagogical/andragogical tool. Finalising the partnership will proceed in framing such experience with recommendations emerged on the process. Educators and trainers along with citizens (according to the organisations profile) well be motivated to participate actively in Thematic seminars, film workshops and transnational meetings in order to advance their emotional, aesthetic and educational abilities through image viewing. A website is going to be developed as resource tank for film education. Experts will be invited

Subjects to be addressed

The art of moving image (ART): the film as aesthetic product. Film enriches the ability to enjoy, understand and appreciate media content from an artistic point of view
Art and Modern Technology:The film in the age of meta- Modernity and Age of Information
Education and Media. According to media literacy principles Film Education contributes to mental processes and thinking from simple awareness of symbols and also enhance the ability to experience an emotion, by feeling a characters depth of grief.
Active citizenship: Film education enhance participants ability to infer the values underlying the messages and so to stimulate active discussions, reflections by coming in a meta cognitive level of consciousness
Migration and Migrant: thematic selection on films focusing on migration experience
Equality: Thematic orientation of films focusing on the role of women, the structure of society, the opportunities.

The communicative approach will consist the pivot for group meetings in local or transnational level in accordance with the intercultural orientation. The seminars will be organised in a cross thematic approach and motivation for discussion through fun and mental processes. Consequently the emphasis will be given to the participants’ self identification in parallel with the sense of belonging, the European dimension,the active participation in equality. The whole program will be developed under the principles of action-research, where the continuous and fruitful overall evaluation is the indispensable element of the process

Film Education for the Promotion of Active Citizenship (ViewN’ Act)

CYCLISIS collected several documents reflect the interest of very organizations, academic, NGO, etc organizing events, developing supportive texts or producing thoughts about media power and FILM education in Greece and beyond. Respecting the authentic sourses of reference, we proceed in transferring information through the selected ones indicatively with links about: